Elena Regina Pettenuzzo was born in Lambeth on 6th July in 1926, the third child and eldest daughter of Giuseppe and Elise. She was Baptised on 19th August 1926 in St Peter's Church in Clerkenwell - it was known then, and now, as the Italian Church.

Elena was very aware and proud of her mixed heritage, her father was Italian and her mother French. She would reflect that when her parents met neither spoke the other's language and neither spoke English - she would say that 'love was the language they spoke and the basis of their family life, that God and Faith were part and parcel of their daily family life'.

Elena was confirmed in The London Oratory on 20th November 1939, taking the name of Therese.

Her growing family settled in Pimlico, and her parents soon enrolled Elena and her siblings in the Catholic Elementary School in Cale Street, Chelsea, which had the Oratorian Fathers and the Daughters of the Cross responsible for the adjoining boys' and girls' schools.

Like many schools in London, the Oratory school had to cope with the war years. Elena experienced two evacuation periods, firstly to the South Coast to be out of London, then when bombing increased there she was moved to the Rhondda Valley in Wales. In both instances, she had the challenge of being big sister and to 'look after Nilda' - a duty she took seriously then and for the rest of her life.

Elena really appreciated her Oratorian education, in spite of the trauma and disruption of the war years. She thrived and left school in 1942 with her Oxford School Certificate in six subjects, plus a range of eight Certificates from The London Chamber of Commerce concentrating on the usual commercial subjects.

On returning to London and leaving school, these commercial based skills led to a dream of training in Accountancy. In 1943 she secured a position as a shorthand typist in a firm of Chartered Accountants, which led to an increased interest in financial aspects. This was to colour the rest of her life.

However, instead of fulfilling her dual dreams of qualifying as an Accountant and of marrying and having children - she had experienced the joys of looking after her eldest nephew while her sister-in-law was in hospital - she applied to enter the Daughters of the Cross after listening to the still voice of calm calling within her. Her only deep concern at this time was not what she would be saying goodbye to forever, it was for her father. He would, if she was accepted into the congregation, be totally on his own. His wife was deceased, his younger son was studying for the priesthood and his younger daughter was already a Daughter of the Cross. Trustful transparency, openness to the workings of the Spirit, and the freedom of genuine family love, enabled both father and daughter to accept and embrace the separation.

Elena entered in 1950, her postulancy and noviciate were spent in Carshalton. As was the custom of the time, she took the name of Sr John Delores. After her First Vows in 1959, it was a return to full time study - but not in Accountancy! 1953-1955 were spent in Digby Stuart Teacher Training College. The years 1955-1956 found Elena doing her specialist year in Domestic Science at Seaford College. Newly qualified she moved to Bury, to teach Domestic Science and French in our Grammar School. During this time, in August 1959 she made her final vows in Liège in Belgium. This would not have been a dream posting for Elena, however it was warmly embraced and when leaving in 1965, she and her pupils were very sad to say goodbye.

Her posting to St Elizabeth's Centre in Much Hadham was to administer the complex finances of the specialist Centre. Those stored skills from life in the Accounting world were needed to be at the forefront again. However, the special needs setting would demand the learning of new skills as there was another challenge for Elena just around the corner. Just one year later, she was asked to take over the Headship of the boarding school providing for children aged 5-16+ with frequent and complex epilepsy - a post she was to hold until 1976.

Another change of role was to follow - for six years she was to lead the Broadstairs Community, which ran a special residential school for children with challenging behaviours. This demanded a different type of leadership and support for pupils, staff and the community.

In 1982, Elena was asked to return to Much Hadham as Community Leader. This period was one of great change and development - Elena was the public face of a major fundraising appeal to redevelop the Adult Home. She held this post for 15 years and was awarded an OBE for her fundraising efforts. One of the Adult Bungalows was named after Elena as a tribute to her hard work in this redevelopment and transformation. 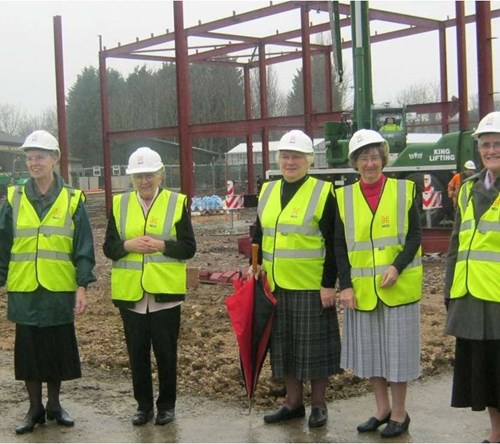 In 1997 Elena received a new challenge - she was appointed to be the Provincial Bursar which involved running the central offices of the Province/Charity, and included co-ordinating all the accounts across the Province. If this was not challenge enough at 70+, she worked with the Provincial to establish the Charity as a Company Limited by Guarantee and held the position of Company Secretary. Elena retired in 2012, but remained a willing pair of hands when extra tasks presented in 2017.

Besides her main appointments, Elena was involved in several of our Advisory and Governing Bodies which monitor our regulated activities. She shared her skills with our Congregation's finance Committee, helping to draft our Financial Handbook. She was a founder member of the Charifaith Investment fund Committee and for many years was on the editing Committee of our PROVINCE magazine.

What were the driving forces that sustained, what to the casual observer could appear to be a timid and self-effacing personality?

Those who knew Elena well knew that within, there was an unselfish, amiable, steady, willing, generous and sincere soul; who if required was able to challenge and defend the rights of others, a person of courage able to embrace the major changes asked of her, because she trusted in her Lord.

If we ask what sustained Elena - it was the love she inherited which spoke to her of a Loving God. It was a love given freely to her for her to share with others. Her faithfulness to personal prayer and participation in liturgies as reader and minister.

We teased her about her social awareness - could be called nosiness - yet we all know how many people appreciated the time she gave to others. Her ability to listen, to remember, to stop for a chat, to give time for a phone call or to send a card.

Let us always recall individually how Elena has touched our lives and thank God for her life and the contribution she made to society generally.