Nikey was born on 20th May 1989. Alongside her two older sisters, Ceri and Jaimi, life was pretty normal. She attended Mums and Tots sessions with me while her sisters were at school, and later attended Playgroup when she was 3.

In January of 1993, both Nik and Jaimi contracted Meningococcal Meningitis – scary times. Whilst I stayed in hospital with the girls, their Dad Pete worked and looked after Ceri with the help of grandparents. Nikey required a lumbar puncture for a correct diagnosis, which did show the deadly strain of the bug. After a lengthy period in hospital and recovery at home, both girls made a complete recovery.

Life pretty much returned to normal for 4 years.

On the 17th May, 3 days before Nik's 7th birthday, at 8am, life for the family changed forever.

I found Nik looking up to the ceiling, repeating an odd noise over and over again. At first, I thought she was messing about and told her to get dressed ready for school. Nik continued to make the noise. I  then realised something wasn't right, so I took Nik to the Doctors who said it sounded like some kind of seizure, but nothing would be looked into unless it happened again. It happened again over breakfast the next morning. Nik made a quick recovery. The following Monday at school, where I also worked, staff reported to me that Nik had wet herself in the playground. This was very out of character for Nikey; she had not even realised it had happened.

This was the family's introduction to a lifelong battle with epilepsy and the political, social and financial trials that seem to go with the physical condition.

My first thoughts were for Nik's safety in primary school – during PE, science, in the playground, at lunchtimes. After a lengthy battle with the Local Education Authorities (LEA), they awarded 2.5 hours of Teaching Assistant cover per week, during these risky times. Nikey continued to have seizures. Life was a worry.

During this time Nik underwent many tests – EEGs, sleep-deprived EEGs, MRI scans. Eventually epilepsy was diagnosed and medication was given. After a year of trying to get her seizures under control, I asked her Consultant "How long does this normally take?”. When he replied “2 weeks”, I realised this was something we were going to have to live with as best as she and her family could.

Nik still attended school daily, but after each seizure she had to be sent home. As a Mum, I wanted everything to be as normal as possible for all the family. But it never would be again.

After another lengthy battle with the Education Authority, Nik started Senior School. This lasted 12 months. With many seizures, both day and night, Nikey started to fall way behind her peers both socially and academically. She was bullied.

At her worst seizure control, Nik suffered 200 seizures per month. But both I, and Nik, were determined not to her epilepsy stop her from doing what she wanted. We never wrapped her in cotton wool; the most we did was postpone things until a better day. Epilepsy lived with us, she did not live with epilepsy.

In her life, Nik swam with dolphins, she paraglided, she rode the biggest roller coasters. She reverse-bungee jumped, she swam for her local swimming club, and she swam in the sea. There were no limits to what she wanted to do and to what she did. I often held my breath, hoping all would be ok, but was always by Nik's side, just in case.

After another conversation with another Consultant, I discovered there was a school in East Anglia, that was specifically set up for children aged 5- 19 with epilepsy and other needs: St Elizabeth’s. We arranged to visit.

So began our next challenge with the LEA – a bigger battle than before, as they didn't want to fund a placement outside of the County. With persistence – and getting our local MP involved – Nik’s place at St Elizabeth’s was secured.

At age 13, Nik started this new chapter in her life. It was difficult for me as a mum to let her go to a residential school. But with 24/7 care, waking night staff, seizure alarms on her bed and rooms, and education suited to seizures, plus fully trained staff, Nikey was in the best place she could be to learn and socialise and stay safe while away from her home.

Nik’s seizures continued to debilitate her life considerably. Many hours were spent in a wheelchair, or recovering in bed. Emergency medication was frequently administered. Physical damage was regularly done: Nik lost her front teeth, she had stitches in her face, she broke her collar bone, she had arthritis in her right shoulder, and she needed surgery to remove broken pieces of bone from her shoulder from so many falls during seizures. The School always liaised with me and kept me up to date.

During these years, Nik tried 25 different medications or combinations of medication. Sadly none worked. Due to continued seizures or medications, much of Nik's memory had disappeared over an 8 year period from age 8-16, and they often left her listless, lifeless, and often unable to talk or walk.

In 2006, Nik started yet another medication, after tests showed she was not a candidate for brain surgery, as both sides of her brain were involved in her seizures. This new medication was the beginning of a very exciting time.

Within 2 weeks, Nik’s seizures had dramatically reduced to 11 per month, rather than the 200 she was experiencing. Her memory improved greatly, as did her quality of life, her education and her outlook. She continued at St Elizabeth’s School and later their College.

College brought a new challenge for me, proving to the LEA why local Colleges could not offer Nikey what was needed: none offered a waking night staff, none were epilepsy friendly. Nik's safety was paramount to her education. After showing report after report to the LEA, they finally agreed to the funding of Nik's place.

Nik flourished in College, learning new life skills. Her need for independence was obvious to staff when she asked to walk into town by herself. It was agreed she could but with staff following behind, but it turned out that Nik missed chatting to someone so ended up walking with staff anyway!

By now Nik was flourishing and it was obvious to her and her family that her main concern was her lack of friends. Her friends from her younger days had moved on, but staff and learners at the College became her new friends, her peer group and her support when needed.

Nikey remained in College until she was 21 and excelled during this time. She announced that when she left College, her priority would be to live close to her family, she wanted a paid job and a family.

So then began my next challenge. We all have a choice about where we want to live as an adult and I was determined that so should Nik. I had already put Nik's name down on the housing list in Cambridgeshire and a bungalow was offered to her which was 5-10 minutes from all family members. We took it.

Nik moved into her new home after choosing how she wanted her home decorated, and all adaptations were completed, just like at St Elizabeth’s.

She even helped to interview all the candidates who were going to help support her 24/7 in the event of seizures in her own home!

Nikey decided to find more volunteer work after being told she could not do paid work as safety was an issue...she wasn't happy about it. She went back to a local College to fill in the missing education from her younger years, joining both numeracy, literacy and computer courses. She made beautiful jewellery – which she had first started making whilst at St E’s where she found she was naturally artistic – to sell and decorated tote bags. She had a very fulfilled life. She had made new friends on these new courses and when going to karaoke nights with friends.

Life can be cruel...Nikey was found sleeping on 21st March 2013 by myself. She had died from SUDEP (Sudden Unexpected Death in Epilepsy).

In her memory we continue to raise awareness and funds for St Elizabeth’s and SUDEP Action. Her jewellery continues to be made and sold by one of her elder sisters, and we hold an annual Ball, plus many other events during the year and have raised over £27,000 to date.

Nikey was an advocate for epilepsy, so we are doing what we can in her memory. Our loss will not be in vain.

The Nikey shaped hole in our lives will never heal, but she left a trail of glitter for us to sprinkle and do what we can to improves the lives of those like Nik…to see the ABILITY and not the disability.

From Caron, a bereaved mum. 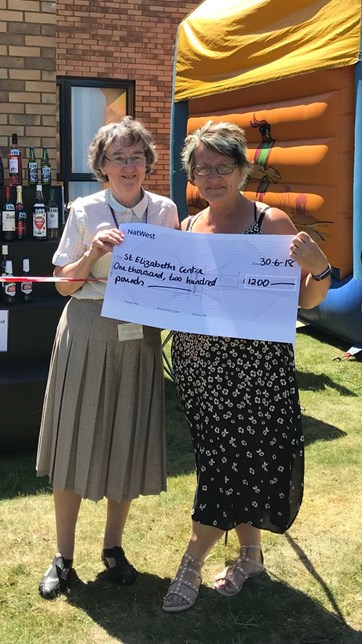