Luke's Story - as told by his mum

Luke's Story - as told by his mum

Luke our eldest son is 21, he started having seizures at the age of six. Initially these were every couple of months and were fairly dramatic tonic clonic seizures but after around a year he was having seizures of all types including up to 50 absences a day.

Over the years Luke was treated with many different drugs and drug combinations, none of which ever controlled his epilepsy and most of which had terrible side effects (in Luke’s case mostly behavioural). At the age of 11 Luke was fitted with a VNS (vagus nerve stimulator) but recently this was switched off as it was felt it was not improving Luke’s seizure control.

Luke has learning difficulties which were picked up at around two and a half years as he was slow to speak. Our aim was to keep him in mainstream education with appropriate support for as long as he was happy, learning, and progressing. For Luke, this was up to the age of 16. He was fortunate to have funding for 1 to 1 support and to attend a school that was able to meet his needs (it’s fair to say staff and pupils became experts in epilepsy and seizure care!). He has always been very easy-going and a hard worker, so, seizures aside, he enjoyed school following a differentiated personalised timetable. He always had friends and loved going to school, in many ways he was oblivious of the toll his seizures were having on us as a family.

Luke has severe complex epilepsy. He has the tendency to have runs of seizures and, often at night, and these can be extreme. At times he has ended up in hospital. We tried to manage his seizures ourselves. His three younger brothers became carers too and from a young age knew exactly what to do when he had a seizure, including using a suction machine and a ‘bag and mask’. No support was offered locally until the stress became so great that I suffered a breakdown. We just managed day to day. Looking back, we were providing full time nursing care while trying to manage the needs of a large family, and trying to provide Luke with a full and happy life. Luke went to Scouts, attended football coaching, as well as attending church and youth groups. Many of these voluntary organisations provided their own extra carers for Luke for which we were very grateful. From the age of 16, Luke had a night a month’s respite care. These nights were a rare chance for uninterrupted sleep, where we could switch the monitors off and spend an evening focussing on our other children.

We started looking at an early stage for where Luke might progress to after the age of 18, around three years before. As soon as we found St Elizabeth's we knew it was the perfect place for Luke: a place where he would be safe, learn how to be as independent as possible and build on his academic skills while making friends and learning to live as part of a community. Luke spent two years at a local college while living with us and at 18 he transitioned to St Elizabeth's.

The move to St Elizabeth's was life changing, not only for Luke but for us too. From day one he was settled and started calling his bungalow ‘home’, which was wonderful for us as we dealt with the inevitable guilt of him moving out. His program at college was designed around him, so he continued to build on his skills in English and mathematics as well as taking lessons in music, drama, computer skills, employability, social skills etc. He also received speech therapy which was extremely important for him. Living in a bungalow with his friends was amazing for Luke. He started to plan his own meals, leisure time, shopping, and even when and how to wash his clothes! We joke that his social life was better than ours with visits to the pub, cinema, sports clubs etc. all of which he could enjoy while being kept safe.

Luke moving out changed our family completely and it probably took us a good six months to get used to it. First of all it was an adjustment, and we all missed him and his wonderful personality being around all the time but frequent phone calls and visits helped. Knowing Luke was safe and he was being so well cared for meant we could start actually sleeping properly. We were kept up to date with Luke’s Epilepsy and were of course told when things were serious so we could decide if we wanted to be with him in hospital. Luke’s brothers had never complained about the load they carried being young carers but it’s fair to say their lives opened up once they no longer had the responsibility and we could all be a bit more spontaneous. They were able to follow their own interests more, enjoying their acting and music, even forming a band together. Visits to St Elizabeth’s were lovely. We could see Luke happy in his new home, meet his carers and interact with his friends. Watching him grow in confidence was a joy. He loved making us cups of tea in his kitchen and playing host.

Luke spent three years at St Elizabeth’s. The final year he lived out but continued to attend college. The skills he learnt and the confidence he gained means that since he left, he lives in a flat in a residential home, has a job, a busy social life and still enjoys learning at his local college. St Elizabeth’s gave Luke the chance to experience what every other 18 year old can, moving out from home and becoming independent, all while his complex medical needs were taken care of and he was able to continue learning and progressing. 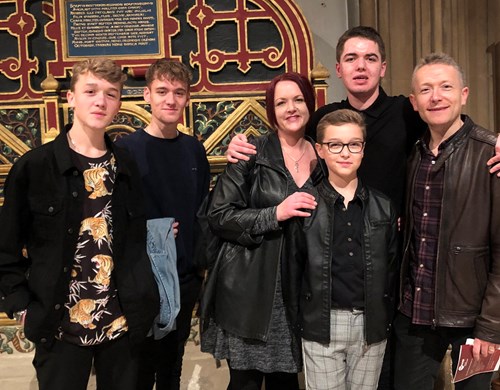